Blanche, 33 one of Canada’s most successful futsal players and current coach of Futsal Club Toronto holds a successful track record in Canadian futsal history. He has over 50 international games played at the club and national team level, and has played in North America, Central America, South America and the Middle East. He has played against world renowned players like non other the famous Brazilian Falcao, Linisio, Barcelona duo Wilde & Ari and Colombian sensation Pinilla.

Rubio Mileo Guerra has provided the following statement from his home in Kuwait City early this morning:

“I am very ecstatic with the new appointment of Roy Blanche, who holds a remarkable futsal career in the Canadian futsal scene and today is part owner with Lorenzo Redwood in the Canadian Futsal school known as Futsal Club Toronto. I strongly believe he will be able to contribute vastly, in the individual growth of my futsal goalies through the experience he has gained on the court. This will also be a great experience for his coaching record, a journey he has already started and I have no doubt he will be a very successful one. Coach Blanche, was part of my futsal journey in Canada as an athlete on my squad. Together, we have a great friendship and professional relationship which we solidified during his visit to Qatar Sports Club in 2009. I strongly believe with Blanche’s appointment, we will have an optimal technical staff at Al Arabi Sporting Club. Best of luck to all of us and congratulations to Coach Blanche.”

Blanche will be fully involved with Futsal Club Toronto while in Kuwait City and has provided the following statement:

“This is a great opportunity for myself as I start building my coaching experience and at the same time this is phenomenal news for Futsal Club Toronto’s growth. I will be able to provide the club with new material as I continue to gain valuable experience from Rubio Mileo Guerra, a world class futsal coach and my mentor. Rubio has been our Director of International exchange at the club and we have great plans lined up for Futsal Club Toronto players as they continue their training with Lorenzo Redwood, Alvaro Yaques and Nico Fernandes along side manager of operations Joseph Candelaresi and our coordinator at FCT, Veronica Harispuru. I will be retuning at the end of May as the futsal league finishes of in Kuwait and I will continue my commitment to the growth of our club, coaching staff and futsal in Canada. I am honoured to join Al Arabi Sporting Club and look forward to this great futsal opportunity.

Blanche will be arriving in Kuwait this Sunday and will form part of Rubio Guerra’s technical staff, who has lead the squad to its current third place position in the Kuwait Futsal League. He will also work with the U17 futsal program and the Al Arabi Men’s futsal team. He has been also apointed as a player/coach and Rubio will utilize Roy on the court as the opportunity arises. We look forward to hearing about his success’ in futsal with this great international experience. 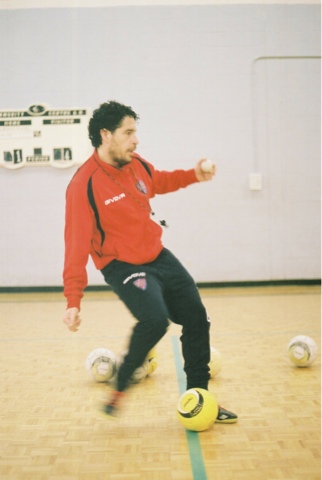