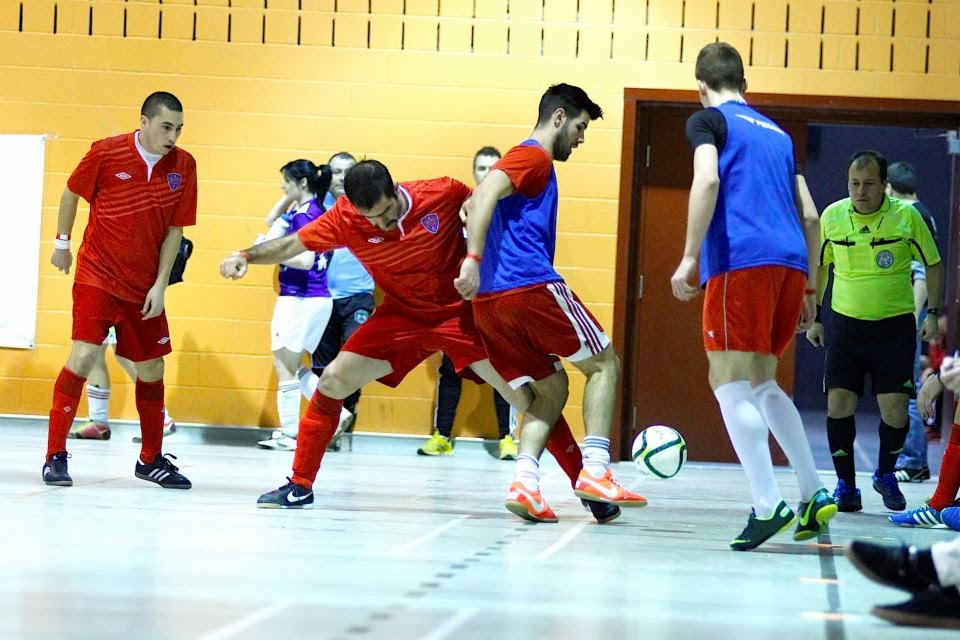 St-Hyacinthe, Quebec—6th Edition of the Defi Futsal Tournament wrapped up Sunday, March 2nd after a weekend full of skill, agility & samba. The largest Futsal event involving over 60 teams from Quebec and Toronto, in 4 divisions, shook the town of Saint Hyacinthe in the Monteregie region just east of Montreal.

Venues were spectacular with 5 futsal courts much larger in surface than what players in the Toronto area are accustomed to playing on. Futsal Club Toronto and Toronto Boca Jrs were the only two teams in attendance representing Ontario and went head-to-head in this year’s finals. Both teams scored an A+ for futsal tactics which was characteristic amongst both Torontonian squads. Head Coach Lorenzo Redwood of Futsal Club Toronto commented the following:
This year we reached the finals of the tournament and along the way demonstrated class and how futsal is played. We were happy to finally get together as a squad and take to the courts, compete, and play Futsal after a 2nd year of inactivity in the Toronto Futsal League. At times, we tried to look for the perfect pass and perfect goal and we did not take the opportunity to take shots on net when we had the chance. Leading up to a tournament like this playing in a league is key to building chemistry amongst players. Congratulations to Toronto Boca Jrs. for the win and respecting us by letting us play up. They played a good defensive game with counter attacks against our squad. Overall, we lacked in shooting and finishing clear opportunities where the ball did not find the back of the net and in those 30 minutes Boca was a better team. We need to play more and in a structured league to get games in prior to a tournament of this caliber. Thanks to all our players for the hard work and dedication leading into the tournament; one loss since 2011 is a great achievement.
Futsal Club Toronto put on a futsal spectacle with set plays, rotations, technique and possession that impressed all spectators. The squads’ foundation is based on 5 Canadian National Futsal Team players all who proudly sported the red and white for Canada in the 2012 CONCACAF Futsal World Cup Qualifiers in Guatemala City. Politics is no stranger to the Toronto futsal scene and all our players are experiencing a dry spell as of the last two years. The Defi tournament was a bridge for competition amongst the Toronto squads providing its players favourable competition that can go either way for both teams. The Ontario Soccer Association has taken over the reins of futsal in the region and will provide the much needed structure, administration and leadership that will aid in mending the fractured futsal scene over the last few years.
Byron Garcia President of the Toronto Soccer Referee Association and Vice President of Ontario Soccer Referee Association was invited on behalf of Futsal Club Toronto and Defi Futsal organization to participate in this year’s tournament and provided the following statement, “I felt honoured for the invitation extended to me on behalf of Futsal Club Toronto and the Defi organization and mostly for the exchange of knowledge with the futsal referees in Quebec. I enjoyed myself and look forward to being able to work with them in the near future”. Byron Garcia is recognized as one of the top futsal referees in the Toronto area and an active member in the soccer community.
Futsal Club Toronto congratulates Defi Futsal organizers for their dedication to the sport of futsal and for the excellent venues, smooth operations and especially to all futsal teams that took to the courts to compete for the prestigious title of 2014 Defi Futsal Champions. Futsal Club Toronto returned to Saint Hyacinthe as defending champions and placed 2ndto 2014 Champions Toronto Boca Jrs in the tournaments elite division. We look forward to the 2015 edition with the hopes of a Quebec squad reaching the finals.
Share Post: