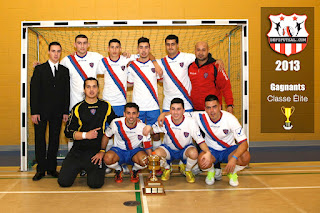 The Final of the 2013 Defi Futsal Tournament was a lesson in futsal for the region of Ste-Hyacinthe, Quebec. Futsal Club Toronto’s Men’s squad played a very systematic approach, touching and rotating the ball finding the back of the net between the black and white posts at Collège Antoine Girouard during the 5th Annual Defi Futsal Tournament this past weekend.
The tournament was comprised of over 50 teams in four divisions: Masculin élite, Masculin compétitif, Féminine élite, Féminine compétitif all vying for the title-2013 Defi Futsal Champions.
FCT’s King of the Courts made a clear statement in their first game match vs Nouvelles-Frontières finishing off with a 6-3 win. Nouvelles-Frontières were faced with an unknown challenge and FCT clearly demonstrated to all the challenges that “indoor soccer” players face when matched up against a futsal specific club.
“First half was a sluggish start for the squad due to the seven hour drive the night prior to our arrival into Ste-Hyacinthe. We were unaware of the caliber of  Nouvelles-Frontières let alone the rest of the clubs participating this weekend; however, we only imagined a physical, fast paced game all characteristic of soccer players in the province of Quebec. We managed to find our groove within the later start of the first half and going into the second half. The second half, we demonstrated our futsal flare, something we have been training hard at in Toronto months prior to the tournament”, commented Head Coach Lorenzo Redwood.
The second game of the preliminaries was against Rimouski the defending 2012 Champions, “we expected a tough game going into the match and we respected the competition that we were facing. We went in full force and played a defensive approach going into the game until we were familiarized with their system; with that said mid-way through the game we changed our approach and dominated the game 4-0.”
The management at Futsal Club Toronto decided to withdraw interest in any present leagues in the Toronto area for the 2013 season, which meant the men’s squad went into the tournament without any exhibition games played. However, the team is comprised of many veteran players like Captain Alvaro Yaques, Timo Garzon, and Matthew Rios which were the solid foundation the squad relied on for most of its success. After day one of the event, the team was able to gel well among new members and this clearly solidified the relationship of all players and mentally made them stronger entering into day two, this marks the beginning of a strong relationship for the squad.
As day ones competition was tough for some, those that did not survive the group stage matches saw most teams packing their bags for the long drive home. All victorious teams were in attendance for the FCT matches as they displayed excitement among the fans for their magical talent and confident ball movement displayed on the court, the spectacle prepared the competition and they etched and executed a plan for day two of the competition, “The contending teams went into all three games with a well thought out plan defensively and attacking; FCT stuck to the game plan and left teams trailing in their wake. We proudly thanked the crowd for their support and lifted the 2013 Defi Futsal Cup with grace and style”– commented Coach Redwood.
The invitation from Defi Futsal Association founder, Vincent Cournoyer was greatly received by FCT Management and confirmed their attendance with great honor  The weekend long tournament was run like a well oiled machine and without hiccups and their was great energy on and off the courts. The organizing committee scored an A+ for their organization and dedication to the development of futsal in the region of Quebec.
Share Post: